We pucker up just thinking about it. People who move to Florida cry because they can't grow it. Those who dine with us can’t get enough of it. 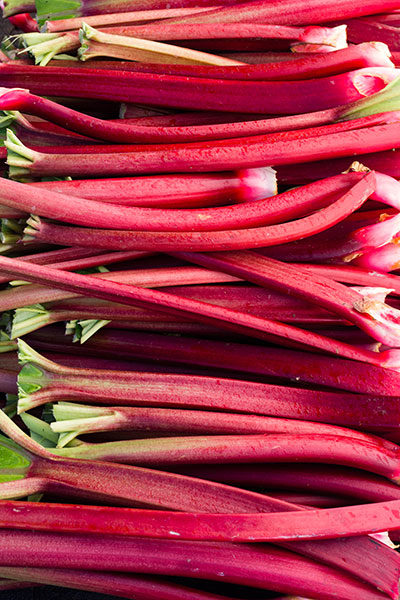 It’s the pucker-power that makes rhubarb the world's favorite pie plant. Ah, but did you know that rhubarb sauce is great served with seafood? Or that it has ties to baseball and it can save the ozone layer?

Rhubarb suffers from an identity crisis. It has been described by some as an "uncommon vegetable" because if its use as a fruit in sauces and pies. Its tart flavor and its customary uses make it a reasonable facsimile, when cooked, of fruit.

We adore rhubarb, so while some may haggle over how to categorize it, at Café Nuovo we’re perfectly happy to use it in the most seductive ways.

Thanks to the Romans, the word "rhubarb" takes its name from the Latin rha barbarum. Rhubarb literally means "from the barbarian, Rha." Rhubarb grew along the banks of the river Rha, the ancient name of the Volga. Back then, the region was considered foreign, or barbarian territory.

The use of the word "rhubarb" dates back to the early days of Shakespearean theater, a use that carried forward to present day. Dictionaries first defined rhubarb as the edible plant that it is. But is has also developed a slang interpretation. Say RHU-barb with attitude and you can see how the word became synonymous with a heated argument or squabble. Linked to baseball, a rhubarb has come to be a term to describe the sparks that sometimes fly between umpires and players.

Rhubarb loves cool places. It even grows in Siberia and Alaska. It’s especially appreciated here in New England because it's one of the first edibles to appear in the spring garden.

Here in our kitchens, rhubarb adds a zippy signature to sweets and savories. When combined with strawberries, raspberries, apples, and other fruits, the flavor only gets better. Rhubarb also makes a terrific sauce for chicken, venison, halibut and salmon. Rhubarb, like apples, hold moisture well, so adding diced rhubarb to some recipes makes them sing with flavor without making the recipes runny.