The onset of winter in Florida not only brings wonderfully mild and sunny weather but also the eagerly anticipated annual harvest of a Capriccio favorite and one of the most sustainable seafood delicacies you can eat - Florida Stone Crab. In fact, the Monterey Seafood Watch gives Florida Stone Crabs its Best Choice Seal of Approval for sustainability. 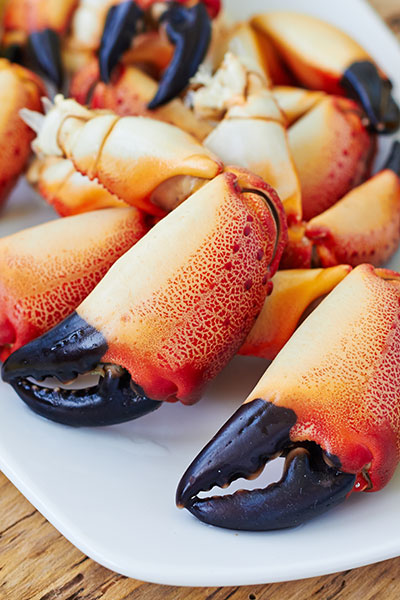 The special thing that makes Stone Crab such a uniquely sustainable food is the fact that we can take its claws and they’ll grow back. Re-growth takes only about a year. The bonus is that each time the crab molts, the new claw grows larger. With other crabs, the whole body is harvested and there is no second, or third, or fourth coming.

Stone Crabs evolved the ability to regenerate their limbs over and over again so that they could sacrifice an extremity or two to escape from enemies. The bodies of Stone Crabs are relatively small and rarely eaten, but the claws, which are large, seemingly rock hard and powerful enough to break an oyster's shell (that’s where they get their name), are a delicacy.

Florida Stone Crabs are mainly found on the Gulf of Mexico side of the Florida peninsula. Harvesting is accomplished at sea by removing one or both claws from the crab and immediately returning it to the ocean where it can regrow the lost limbs. Claws must be at least 2.75 inches long, measured from the tips of the immovable finger to the first joint. The key is popping off the claw while keeping the crab alive. A clean break at the joint is critical or else the claws won’t grow back.

Once harvested, the arms are then graded according to size (medium, large, jumbo, and colossal). They are taken back to the docks and boiled in a large vat before being shipped to the finest restaurants and fishmongers around the globe.

The sweet, flaky-dense flesh of stone crabs is traditionally eaten cold with a mustard-mayonnaise sauce. Here at Capriccio, we favor something more elegant and serve them with our famous Aurora Sauce. Of course, you can also opt for our housemade Cocktail Sauce.